Sandro Albert, respected musician and composer in the competitive New York jazz scene, is Lineu Bravo’s latest client. Born in Porto Alegre (RS), Sandro moved to the USA nearly 20 years ago and although he couldn’t speak English back then, he managed to build a solid music career. 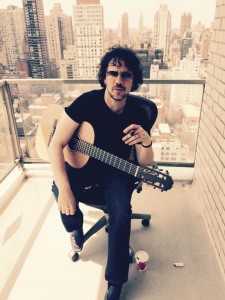 When he went to the USA in 1996, he had the intention to stay for only 6 months. However, life had spared him other plans, and the musician started to play with bands he had always listened to: Earth, Wind and Fire, Gap Band, Village People, Kool and the Gang, Tower of Power, Chaka Khan e Doobie Brothers.

This Brazilian musician story is incredible since it is almost unimaginable to think that a white young Brazilian boy, who didn’t know how to speak the country’s language, would get a place in a Californian Black music band, the “War”. What happened is that the Americans were impressed by the music style that he played on the breaks, our beloved Choro.

Sandro has built a solid career in the competitive New York jazz scene, and he is working on a new project to be launched soon: a guitar disc. Recently, he’s purchased a Lineu Bravo guitar with Canadian cedar soundboard and an Indian jacarandá back.

The musician heard about the luthier work through Elder Costa, from Minas Gerais, who is also Lineu Bravo’s client and Sandro’s friend for years. Sandro Albert was delighted with Lineu Bravo’s work and has already ordered his guitar.

The Bralizian musician lives in the USA nowadays, and, there, he spreads Brazilian music, now playing Lineu Bravo guitar.

The luthier Lineu Bravo, who reached the age of 50 last march, finally got to deliver the first guitar of the special edition, a  7-steel-string guitar that takes the name of the owner: Rogério Caetano design. 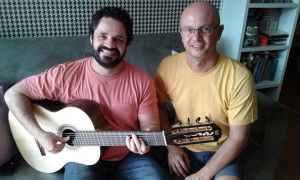 Lineu was welcomed by the acclaimed violonist and composer Rogério Caetano in his house, in Rio de Janeiro. They spent a very productive weekend and had a chance to consolidate the partnership that brings together the art of creating an instrument that speaks for itself and the art of bringing it to life. This partnership, also important to remember, led to the birth of the 7-string guitar, Rogério Caetano design.

The luthier had the opportunity to follow Rogério Caetano in his different aspects as an artist. He watched performances and recordings of the musician and they talked a lot about music, projects, instruments and, mainly, about the consolidation of the partnership that joins professional talents and a great friendship.

The most important thing about this meeting was, however, the delivery of the guitar, that has a singular mark, to his proud owner. The instrument has a mother-of-pearl application in the head. For Lineu, seeing the guitar that stands for his 50 years in the owner’s hands, who gives the name to it, was very exciting. 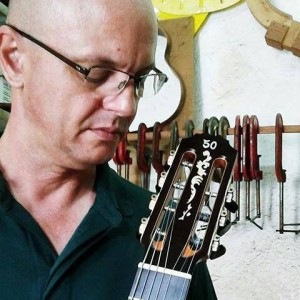 On his Facebook page, Rogério Caetano left a testimonial about how he felt when he received the gift: “Great 7-string guitar that I received from my dear friend Lineu Bravo Luthier! I am very glad to have my name associated to  such a high level instrument! Thank you very much! This guitar is awesome!”.

The 7-string guitar has already shown its work at the stage, delighting the audience, as you can see here: link. In this show, that took place on march 27th, in Buteco Cultural, in Rio, Rogério performed with his trio: Luiz Barcelos on mandolin and Marcus Thadeus on the drums, with Rogério Caetano’s compositions and classic jam and choro (a Brazilian popular music instrumental style). About playing his new guitar, the musician says: “The combination of the guitar with the microphone results in a much more defined sound than the cedar! I am very happy!”

- Learn more about Rogério Caetano on his Facebook page

In 2001, Lineu Bravo started his career as a luthier. Since then, he has built a solid career, collecting many remarkable clients who have been delighted with his art. How many guitars and ‘cavaquinhos’ have already been born in his atelier?

This year, on March 28th, Lineu Bravo reaches the age of 50. And, to celebrate this date, the luthier who was born in Sorocaba and moved to Taubaté 7 years ago, has chosen to impress a mark in his art. At present, Lineu is preparing a special edition of his musical instruments.

The first of this special edition is already in progress and will belong to the great guitar player and composer Rogério Caetano, who names one of Lineu Bravo’s guitar: the Lineu Bravo 7-string guitar of Brazilian steel – Rogério Caetano design. It is worth remembering that the partnership has joined the talent of both in a search for an innovative instrument that could recover what had been lost in the past. 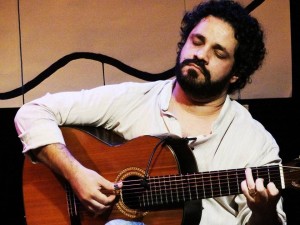 Client and friend Rogério Caetano, who will receive the first guitaar of this special edition/Picture: Marcelo Rodolfo