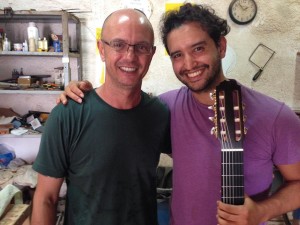 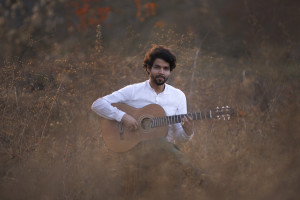 The musician Raphael Gimenes purchased his Lineu Bravo guitar in July 2017 when he went to Brazil. He got to know Lineu Bravo’s work on the internet and through other musicians. He met the guitarist Daniel Marques, also a Lineu Bravo client, who told him about the luthier. Besides Daniel, other musicians that he met at the University of Minas Gerais, where he studied in 2014, also suggested Lineu to him.

Raphael spent 5 months travelling around South America (Bolivia, Peru, Chile and Argentina) with the guitar, composing new songs for his second album. In 2018 and 2019, he went on several tours with his Lineu Bravo guitar.
Raphael left a testimonial about his Lineu Bravo Guitar

“My Lineu Bravo guitar has an impressive sound. Everybody says that. It has a clear sound. It sounds like water touching polished stones on a sunny morning. The guitar is beautiful, and I like it very much. I play it on all the songs in my second album.”

The musician was born in Recife and lived in The USA, Sweden, Salvador, Belo Horizonte and nowadays he lives in Denmark.

His first album named “Raphael Gimenes & As Montanhas de Som” was released in Europe and Asia, and was called a “masterpiece” in Japan. The album also won an award in 2016 on a website called Written in Music.

Nowadays, he is recording his second album, named “América do Sol”, with songs in Portuguese, Spanish and English. He recently went on a tour in Argentina and Brazil, where he made a partnership with Brazilian musicians, such as the singer Ilessi.

The talented musician, who is from Fortaleza and very renowned in the city, fell in love with music when she was a teenager 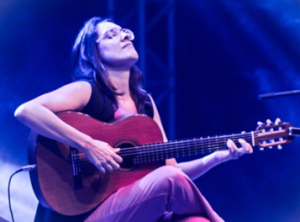 The guitarist from Ceara, Rebeca Camara, who is also a singer and performs songs by Gilberto Gil, Caetano Veloso and Tom Jobim, also plays a guitar made by the luthier Lineu Bravo: a 6-string guitar with cedar, purchased in 2009.

Her passion for music started when she was Young. When se was 15 she started taking private guitar classes. She still plays the guitar nowadays. Rebeca is renowned among the musicians from Fortaleza.