The “City of Light”, as Paris is affectionately known, is a symbol of French and World culture, bringing over more than 30 million visitors and standing out in fashion, art and culture scenarios. A lot of artistic movements, such as expressionism and surrealism were born there, and also, important characters of art and philosophy - René Descartes, Voltaire, Victor Hugo, Émile Zola, Simone de Beauvoir e Edith Piaf.

Over the years, Brazilian music has been strongly disseminated in Paris by talented Brazilian artists who ended up spreading their music over there. Mauricio Carrilho, brilliant violonist, is one of the names that has already performed and recorded in the city.

Mauricio Carrilho was born in Rio de Janeiro. He is a musician, producer, and a popular Brazilian song researcher. He is also a Lineu Bravo’s client.  He started his career in 1977, taking part of many musical groups such as “Carioquinhas” and “O Trio”.

In 1993, he founded the group “O Trio”, in which he acted as violinist alongside with Paulo Sérgio Santos, who played the clarinet and Pedro Amorim playing the mandolin. The group recorded, in Paris, their first record, also in 1993.

Mauricio got a Lineu Bravo guitar in 2006, a 7-string guitar with Canadian cedro top.

At the time, he gave his instrument to an Australian friend, the musician Doug De Vries, who played the guitar and felt in love with it, but he could not wait his own to be ready.  Mauricio says he did it because he was sure he would receive an instrument as good as the one he had. 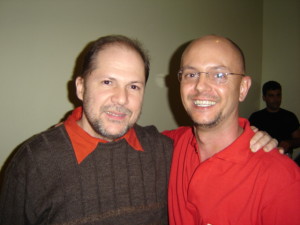 Since then, the musician has been disseminating his talent around the world, including Paris. So, the Brazilian music has been very well represented out there, with a Lineu Bravo guitar.