Another talented international artist disseminates Brazilian music through a Lineu Bravo Guitar! We are talking about Julian Scheffer, an Australian musician that, with Paul Carey, compose contemporary Brazilian music in Australia. 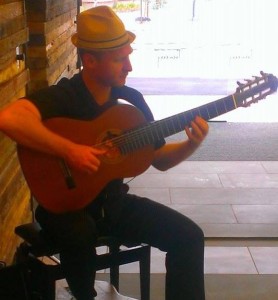 Paul and Julian are completely in love with the Brazilian music and they have spent some time in Brazil studying and playing, specially “Choro”, which makes this partnership come up with a very interesting sound: Brazilian music from the perspective of two Australian artists. This typically Brazilian music style, which is played by them, has a very famous artist in Brazil as a patron: Pixinguinha, and it demands a lot of the artist skills on the instrument, apart from a very good perception of codes that will generate great improvisation.

Their first musical meeting was in 2010, in Rio de Janeiro. There, they devised the project and developed a great friendship. Since then, the project came to life and has been consolidated. So, in 2012, they finally got to record their first CD, in Melbourne, Australia.

Julian and the Lineu Bravo Guitar

During his stay in Brazil, Julian met Lineu’s work and promptly decided to order his 7-steel string guitar. And, once again, Brazilian music has been disseminated through a Lineu Bravo Guitar!