Hamilton de Holanda: “That instrument was a great gift”

You are here: Home » Artist » Hamilton de Holanda: “That instrument was a great gift”

At the Colinas Theater, in São José dos Campos, in October, Hamilton de Holanda left a special testimonial on the blog about his Lineu Bravo tenor guitar

Hamilton de Holanda was born in Brasília and for 30 years he has been delighting everyone in a solid and brilliant career, as he has been performing since he was 6 years old.

Mandolinist and composer, Hamilton presents a flawless technique in his shows and surprises the audience with his meaningful performances with a lot of emotion.

The musician was surprised by a Lineu Bravo guitar, in 2010: “Few years ago, I came home, there was a big paperboard box. I wasn’t expecting anything so I thought that was weird. When I opened the box, it was a guitar case. When I opened the case and started playing that instrument, I went crazy!”. 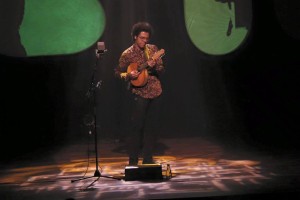 Luthier Lineu Bravo, at that time, had the idea of building a 5-string nylon tenor guitar (that has the same side of a requinto one).

From a memory of a dream, Lineu decided that the perfect musician to play his new tenor guitar would be Hamilton de Holanda. So, after a handmade construction process, the luthier sent the gift to Hamilton.

Check out the testimonial that Hamilton de Holanda sent to Lineu Bravo, in october, about the gift:

-  Learn more about Hamilton de Holanda on his Facebook page