You are here: Home » Artist » Find out how the musician Hamilton de Holanda was surprised by a Lineu Bravo guitar

Everything started with a Lineu’s dream, in 2010

Lineu Bravo luthier has recently been at Hamilton de Holanda’s concert, an artist with a 30-year-old brilliant career. After the performance that took place at the Colina’s Theater in São José dos Campos, a city of São Paulo, they got together for a good talk. 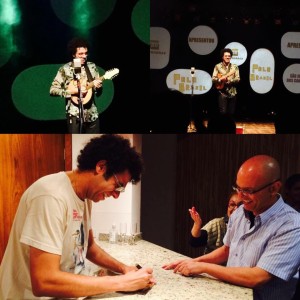 The luthier and the musician talked and recalled how Hamilton was surprised with a Lineu Bravo guitar, in 2010.

At that time, Lineu was finishing a 7-string requinto guitar, which is smaller than a regular one, for Yamandú Costa and, so, he had an unusual idea: to make a 5-string nylon tenor guitar (that has the same side of a requinto one). That would be an interesting instrument, since a tenor guitar is usually made of steel strings.

Lineu Bravo, then, decided to build that unusual guitar. But, who could play it? Who’d be the perfect musician that would perfectly fit in this new idea?

The answer came up from a memory about a dream Lineu had had a few months before. He was in a record store when, suddenly, he saw a CD with a white cover and the following sentence: “Hamilton de Holanda Náilon“.

From that memory, Lineu Bravo answered his own doubt and realized that the perfect musician to play his new nylon tenor guitar would be Hamilton de Holanda.

The tenor guitar became real after a meticulous handmade process and was send directly to its new owner without previous warning. Hamilton was surprised and remembers that moment: “That instrument was a great gift”.

– Learn more about Hamilton de Holanda on his Facebook page