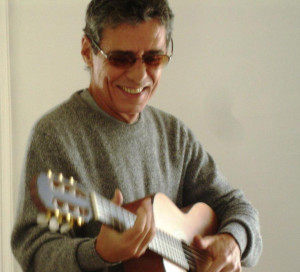 Chico Buarque got to know Lineu Bravo’s guitar through composer Guinga, who is also Lineu’s client. Guinga, in a meeting with friends, commented on the guitar he had just purchased and showed it to Chico, who got immediately interested.

Guinga was the mediator of this partnership, and, in 2006, delivered the guitar to Chico Buarque.

As for the purchase, Chico has left his testimonial: “I have a great esteem for Lineu Bravo’s guitar. Apart from its everlasting beauty, it is a composer itself.”

The guitar is in the video clip “Ela Faz Cinema”:

Son of the historian Sérgio Buarque de Holanda and the pianist Maria Amélia Cesário Alvim, made his public debut as musician and composer when he won the First Popular Brazilian Song Festival, with the music “A Banda”, performed by Nara Leão. After that, he gained the respect of the public and specialized critics. During his career, he made important partnerships with famous Brazilian composers and singers, such as: Vinícius de Moraes, Tom Jobim, Toquinho, Milton Nascimento, Caetano Veloso, etc. Chico has three daughters: Silvia, Helena e Luíza. As a writer, he has published many prominent books. His last novels are: “Budapeste” (2003), “Leite Derramado” (2009) and “O Irmão Alemão” (2014).