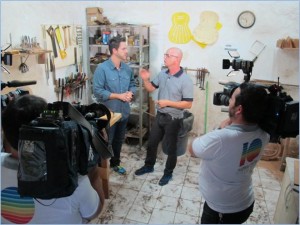 That’s how the Luthier Lineu Bravo explains it to the reporter Vinicius Valverde, in an interview for Papo Vanguarda (a Brazilian TV Show), his unique intuition and endless search for the perfect sound. Lineu Bravo was one of the stars of a TV Show broadcasted in December 2013. “I use to humorously copy Glauber Rocha, who says: ‘A photographic camera in the hand and an idea in the head’. Well, in my case, that would be: ’a piece of wood in the hand and a sound in the head’. “I chase this sound.” Says the luthier, referring to the importance of the sonority on the process of constructing handmade instruments. He also described the start of his career as a guitar maker and ‘cavaquinhos’. As a child, he would repeatedly ask his father, who was a woodworker, about the wood remains: “Is there anything left?”, as he was always searching for material to construct his wood inventions. Lineu also told the reporter when he pranked Chico Buarque and about a remarkable situation that he had with Yamandú Costa. Are you curious? Watch it!