The DVD was recorded live at the “Casa de Cultura Josephina Bento”, in Betim. It contains authorial pieces and Choro classics on the repertoire and it has great relevance because of the lack of instrumental DVD’s of this type.

In May, the radio program Roda de Choro broadcast all the DVD songs. Also, the audio was retransmitted for more than 224 Brazilian radio programs, apart from Japan and Angola. 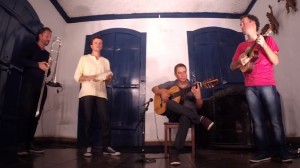 The group recording the DVD

Composed by four of the greatest Choro artistis from Minas Gerais, the group celebrates its 10 years of activities and it has already performed in many national and international musical festivals. It was de first group of Minas Gerais that performed in the “Choro de Brasilia” club.

In the quartet, two of the members play Lineu Bravo instruments: Dudu Braga, a cavavo, which was delivered in 2014, and Silvio Carlos, two 7-string steel guitar Rogério Caetano model, delivered in 2014 and 2015.

Choro was considered the first typically Brazilian popular urban music style and was created with a mix of European dance elements and Brazilian popular songs, with a lot of African influence. Brazilians celebrate the Choro National Day every april 23th. 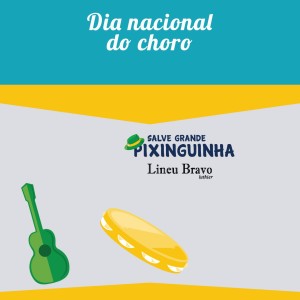 It was an emotional way of performing a melody and just became a music genre in the 20th century. With the end of the slavery, in 1850, a new urban middle class appeared, and this public was the one that most got interested in Choro.

The musician Henrique Cazes, who wrote a book about Choro, explains the origin of the word: – “It is a sentimental way to change European dance into Brazilian songs”.

The musical groups that play Choro are called Rodas de Choro, and the musicians chorões. The instruments of this genre are: flute, mandolin, cavaquinho, clarinet, saxophone, 6 and 7 string guitar and tambourine.

The Chorão has all the freedom to play Choro melodies and he doesn’t need to follow exactly the musical notes on the score. The final result depends, therefore, on the musician interpretation.

Alfredo da Rocha Vianna Filho, the brilliant “Pixinguinha”, was very important for the formation of the music style. He introduced African-Brazilian and rural music elements. The Choro Nacional Day is celebrated on April 23rd, the day the composer was born.